Shaved heads and men with toupees are common scenarios nowadays. Hair loss is a severe emotional issue for many men and women. The hair loss occurs due to many factors for men in which male pattern baldness is a common problem. The toupees are the perfect solutions for men so that they can conceal the bald spots from exposed. The habit of wearing a toupee has come into existence since many years ago. The chances of regaining the earlier appearance and smile are more by hairpiece. Usually, the customers have a dilemma for wearing the hair unit on the head fearing duplicate images.

Wearing hair replacement systems are the modern style for many customers. The balding customers would always aim at restoring their lost appearance by wearing a wig. The chances of restoring hair on the head are more by wearing the hair units. However, the customers are usually worried about natural appearance after wearing the hairpiece. The careful selection of hair units for the bald head is the key to customers' preference. A lot of bald customers from across the globe need a stylish and trendy hairpiece for their heads.

You could see many theatrical artists wearing wigs or toupees for the show. The toupee gives them the confidence to feel like the original character when they act. Also, many young men customers wear stylish and trendy hairpieces in public places. They look different and can stun young girls at first sight. Professionally many men are wearing toupees to cope with their success in their occupations. Indeed, plenty of men nowadays depend a lot on stylish toupees.

How to wear hair replacement systems?

Many men have doubts about wearing a hairpiece on the head. The store selling the hair systems give technical assistance to the customers who need the product. There are different types of hairpieces available at the store for matching different customers. Picking up the right model for the bald head is the right choice for the customers. The appearance of the man after losing hair is distorted entirely. Hence, men prefer nonsurgical solutions such as wearing the wig on the bald head. 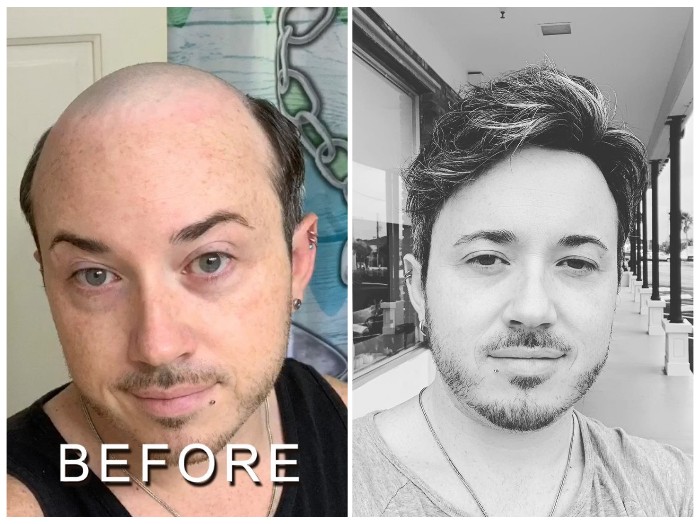 What are the changes expected by men wearing hair units?

Photos and videos of men with hair systems

The customers who visit the hair selling store in the city can view a lot of videos and pictures of men with toupees. The pictures found at the store majorly show the earlier and after images of men wearing a wig. The pictures clearly show the difference in means' look before and after wearing the toupees. The change in the difference in the look of men after using the hair system is visible in the photos. Many stores display videos and photos for the customers who wear wigs before and after.

Men prefer hair wigs that are real in all aspects. The realistic wigs for men have a huge demand among customers. Bald men usually prefer either natural or synthetic hairpieces for their bald heads. Wearing natural hairpieces gives them a realistic look without any traces of duplications. The undetectable image for men is achieved by wearing natural hair unit.

In addition to photos showing common men wearing the toupees, many customers love viewing men celebrities who wear hair replacement systems. These photos of celebrities add value to the buyers who visit the store. Not only for the attraction purpose, but these pictures also give an idea about different types of toupees for the customers. The celebrities use exclusive models of hair units not only for the bald head but for stylish purposes. Many important persons in the city are seen wearing the hair replacement systems on the head. These toupees give them a fantabulous appearance and image.

top 10 results have been found

LaVividHair is seeking for blog contributors who know and love hair. If you know alternative hair or hair related accessories, if you have great understanding of hair trends and fashion, if you are expert in hair care, if you have any experience with salons or celebrities, if you would like to share your experience to help people just like you make the right choice, now contact us at support@lavividhair.com to be a blog contributor. Let’s discuss the details then.

Aitour Ebikes uses cookies to enhance user experience and to analyze performance and traffic on our website. We also share information about your use of our site with our social media, advertising and analytics partners